Passive radiators are used instead of a reflex port for much the same reasons—to tune the frequency response, particularly in small volume enclosures and when small diameter drivers are used, for better low frequency performance. Especially in situations in which a port would be inconveniently sized (usually too long for practical box configurations). They are also used to eliminate port turbulence and reduce motion compression caused by high velocity airflow in small ports (especially small diameter ones). Passive radiators are tuned by mass variations (Mmp), changing the way their compliance interacts with motion of the air in the box. The weight of the cone of the passive radiator should be approximately equivalent to the mass of the air that would have filled the port which might have been used for that design. Passive radiators do not behave exactly as their equivalent bass-reflex designs in that they cause a notch in system frequency response at the PR's free air resonant frequency; this causes a steeper roll-off below the system's tuned frequency Fb, and poorer transient response. Due to the lack of vent turbulence and vent pipe resonances, many prefer the sound of PRs to reflex ports. PR speakers, however, are more complex to design and likely to be more expensive as compared to standard reflex enclosures. 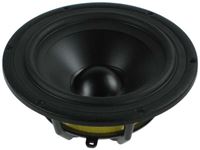